The past is not just an era now over and far in time, it is a current story that, still today, through all those traditions, ideas and innovations bequeathed to us by ingenious and visionary men, relives in the places of our cities, in the excellence of the territory and in our daily actions.

Aware of the importance that the geographical and cultural context plays in the development of every human activity, we want to make known, even if for brief hints, the territory rich in history and culture of navigation and shipbuilding in which our company has grown and from which has inherited values ​​and skills that have proved to be fundamental to make us today a point of reference in the specialized field of structural, acoustic and vibrational engineering.

Our desire is also to involve all those who want to rely on our services in the spirit that animates our company, in tension between a great tradition that continues to inspire us every day and a constant commitment to the future of research and engineering innovation.

Trieste, a city located along the north-eastern coast of the Italian peninsula, was at first Roman colony in the 2nd century BC. and then over the centuries, following the barbarian invasions, a country forced to defend itself from expansionist aims by the Patriarchs of Aquileia and Venice due to its strategic geographical position. Put under the protection of the Duke of Austria, in 1719, it was elected port of the Austro-Hungarian Empire and became a crossroads of different peoples and nations and a seat of international trade, experiencing a period of great economic prosperity and assuming with the opening of the Canal of Suez, which took place in 1869, the role of fundamental node for commercial relations between the Old Continent and the East. 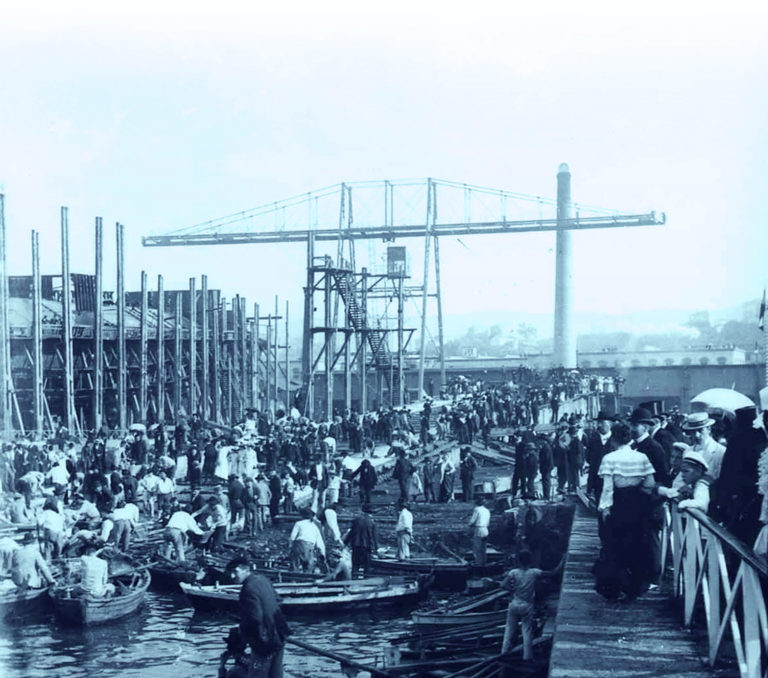 It is in this historical context of ferment that our territory has seen over the decades the development of the most important shipyards of the time thanks to ingenious entrepreneurs and the investment of huge capital that have allowed the birth of some of the largest ships in the world and of the most innovative projects that have made the fame of shipping companies such as Lloyd Austriaco, Austroamericana and Navigazione Libera of Trieste.

The San Marco and San Rocco shipyards, the Sant’Andrea Machinery Factory which produces marine engines and then later also the Trieste Shipyard in Monfalcone, were the great protagonists of the change, witnessing the launch of some of the most renowned and luxurious ships of the time, such as the transatlantic Saturnia (1925), the Vulcania (1926), the motor ship Victoria (1930), the Conte di Savoia and the Rex (1931), the turbocharged Raffaello (1963).

The use of iron and no longer of wood in the construction of vessels and a design calibrated on large dimensions together with the great innovation in the technological field, the changes in the social sphere and new habits and customs of the people of the time allowed the emergence of the first signs of attention towards a methodical study of the noise and vibrations to which a ship is subject, with a view to increasing passenger safety and comfort on board.

In fact, the last century saw the emergence of new concepts in the use of vessels (no longer only used for the transport of goods but also, with the first ocean liners, for the overseas transport of migrants, relegated to the third class, and passengers who could instead find during the crossing, moments of leisure thanks to the luxurious areas reserved for them) and the design and application of new means of propulsion, such as the propeller, a fundamental innovative component for future ships, perfected in Trieste by Josef Ressel, patented in 1828 and applied on large scale at the end of the 19th century, and internal combustion engines, fueled by diesel, which gradually replaced the now obsolete and less efficient steam technology, fueled by coal.

The construction of majestic ocean liners and increasingly performing and avant-garde motor ships for the times made the fortunes of the local shipyards and brought to the fore the name of Trieste and its shipyards all over the world, until around 1970 the request for this type of vessels experienced a decisive setback and, also due to the advent of airplanes and their diffusion as a privileged means of movement, years of profound downsizing of production sites and working personnel followed.

The late eighties, with the entry of Fincantieri into the passenger ship building market, thanks to the experience acquired as a builder of ocean liners in previous decades, and the contextual development of cruise tourism, which expanded to an increasingly broad and varied segment of people interested in new landscapes and moments of leisure, have once again shifted the spotlight on the Trieste and Monfalcone shipyards, which have hosted the creations of giants of the sea for the largest shipping companies, such as Carnival, Costa Cruises, Msc.

The tendency to gigantism is the common denominator in the construction of vessels in recent decades, a trend that is even more thrust in our days, not only in relation to cruise ships but also in the luxury yacht sector.

Smaller but more powerful engines, sources of greater noise and vibrations, larger and more complex structures, suitable for hosting thousands of passengers, the development of large spaces dedicated to both internal and external entertainment, increased needs to guarantee high standards of enjoyment of stay on board for both passengers and staff have led the naval industry sector towards a growing interest in the study of on-board comfort which over the years has conducted to the evolution of noise and vibration calculation methodologies, to the creation of sophisticated numerical analyses for the verification of the robustness of the structures, the technological advancement of instruments for measuring the noise and vibration levels of ships, the study of increasingly performing materials for soundproofing and the protection of internal environments, the development of calculation methods for their distribution inside the ship and their weight optimization.

Today both the safety of ships (expressed in terms of minimized risk of structural cracks and environmental damage) and comfort on board, understood as the reduction of resonance phenomena, structural noise and noise and vibrations in external environments (bridges, swimming pools outdoors, etc) and interiors (passenger cabins, lounges, restaurants) are in fact based on the analysis of the structure and in particular on the study of the vibrations to which it is subject.

The key concept to be taken into consideration is therefore the vibration, which, centuries before being applied to the engineering cases of our time, was scientifically studied by Galileo Galilei (who spoke of the vibrations of bodies in Discourses Concerning Two New Scienses, published in 1638) and was made an object of interest in the following centuries by great mathematicians and physicists, including Sir Isaac Newton (1642-1727 – who developed the second law of motion used to obtain the equations of motion relating to the vibration of bodies), Brook Taylor, Daniel Bernoulli (1700-1782), Leonard Euler, Joseph Lagrange (1736-1813) and others even more chronologically close to us, who have deepened their knowledge and exposed the theory, gradually integrating it and discovering formulas that still today form the basis of many of the sophisticated calculations performed.

The calculations for the analysis of the structure, noise and vibrations, initially coarse, progressively improved with the first software over the years but still approximate, were refined in the eighties with the development of the first FEM (Finite Element Method) methodologies, the whose potential, thanks to an exponential increase in the speed of processors and calculation functions, has now found our maximum expression. The computationally complex numerical predictive analysis of vibrations such as the frequency response and the calculation of natural frequencies are now activities on the agenda that allow a very precise global and local vision of the ship and enable to test optimal solutions respecting the schedule of shipbuilding production.

The challenge today is posed to the operators of the naval industry, and especially to those involved in the field of noise and vibration, by the design of hulls and structures with large dimensions and innovative shapes, by shipowners increasingly involved in the decision-making process and aware of the their needs for comfort, from trends in architecture whose key words are glass and wide open spaces, from new concepts and ways of sharing spaces, from technological development, materials and innovative means of propulsion.

Strengthened by our experience and our passion, we are ready to take up the challenge, aware that it is our turn to bear the baton and provide a contribution in the field of research and engineering avant-garde, developing knowledge and skills that, one day, will be able to turn out to be, perhaps, tradition.